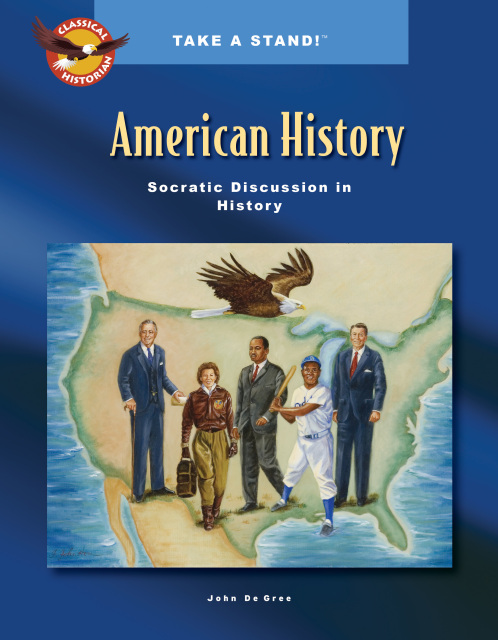 History Content: The American Revolution, The Declaration of Independence, Effects on France, The U.S. Constitution, Founding the Republic, The U.S. as a Young Nation, Westward Expansion, The Civil War, Causes, The Civil War, Compare and Contrast, Reconstruction, Immigration, Industrialization, World Power, United States Became a World Power, Immigration, The Role of Religion in American Life, U.S. Imperialism, Civil Liberties in the 1920s, the Great Depression, The New Deal,World War II in the Pacific, The Cold War in the United States, The Civil Rights Movement, Nixon and Watergate, Technology as a Cause for Change

Thinking and Skills: Fact or Opinion? Judgment, Supporting Evidence, and Primary or Secondary Analysis.
Take a Stand! American History Student's Edition
Author: John De Gree
​Item #015
13 Number ISBN: 978-0-9790388-4-6
10 Number ISBN: 0-9790388-4-7
Publisher: The Classical Historian
Pages: 97
I absolutely LOVE the critical thinking aspects of the (Take a Stand!) curriculum.  Too few curricular address the idea of critical thinking skills.  There is much written for the children to memorize and recount at the appropriate times, but are they understanding what they are reading?  Implementing critical thinking into the reading and discussion of history is a powerful tool to help our children understand what they are reading as  well as form an opinion and knowledge that they will be able to use in many situations in life.   I also love the discussion and multi-age aspects of the curriculum.  Being able to have discussions around the dinner table with family are some of the most important times you will have will your children.  These are very good learning opportunities that are disappearing from too many families today.  The children are able to read the material and discuss it at their level; they will understand the material better with discussion and help teach each other at the same time.  This would also work wonderfully in a homeschool co-op setting!   I have been looking at a number of different social studies programs for the middle and older grades and am very excited to come across Take a Stand!  I am anxious to use it in my homeschool as well as recommend it to others.                    Amy B., Maine - Parent

The Story of Liberty, America's Ancient Heritage Through the Civil War

A Patriot's History of the United States