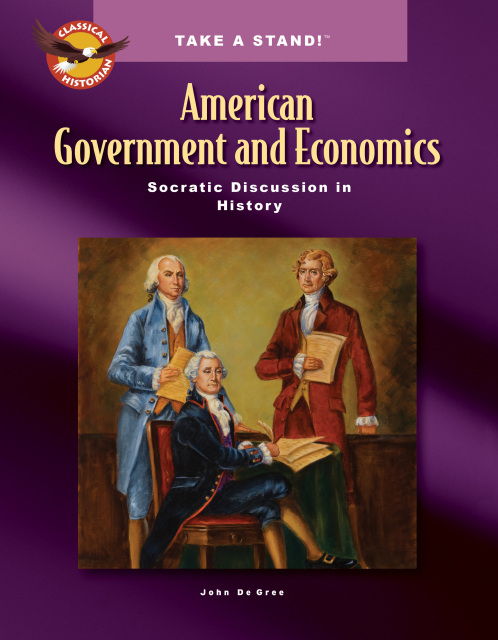 Add to Cart
<
>
The Take a Stand! series teaches students how to be historians. They learn not only basic facts of history, but how to analyze the events of the past. This unique approach makes the student an active participation in the analysis of the past. This is the best of critical thinking, Socratic discussion, and analytical writing in history. The Take a Stand! series is not a set of textbooks, but rather thinking, reading, speaking, and writing guides. Take a Stand! shows the student how to be a historian.

​Thinking Skills: Fact or Opinion? Judgment, Supporting Evidence, Primary or Secondary Analysis, Using Quotes, Taking Notes,  Analyzing Primary Sources, Cause and Effect, and  Compare and Contrast.
Title: Take a Stand! Government and Economics Student Edition
Author: John De Gree
Publisher: The Classical Historian
Item #017
Pages: 68
ISBN: 9781095690420
​I absolutely LOVE the critical thinking aspects of the (Take a Stand!) curriculum.  Too few curricular address the idea of critical thinking skills.  There is much written for the children to memorize and recount at the appropriate times, but are they understanding what they are reading?  Implementing critical thinking into the reading and discussion of history is a powerful tool to help our children understand what they are reading as  well as form an opinion and knowledge that they will be able to use in many situations in life.   I also love the discussion and multi-age aspects of the curriculum.  Being able to have discussions around the dinner table with family are some of the most important times you will have will your children.  These are very good learning opportunities that are disappearing from too many families today.  The children are able to read the material and discuss it at their level; they will understand the material better with discussion and help teach each other at the same time.  This would also work wonderfully in a homeschool co-op setting!   I have been looking at a number of different social studies programs for the middle and older grades and am very excited to come across Take a Stand!  I am anxious to use it in my homeschool as well as recommend it to others.                    Amy B., Maine - Parent

For detailed information on the games, Go Here

For detailed information on the books, click the links.

For Details of each of these products, Go Here.

Buy two products at once for a Discounted Price! Teaching American History with Games book has an explanatory paragraph for each of the images found on the Memory Tiles and the Go Fish cards. Read a few of these out loud before you play. After playing the games, your children will have the history of each of the cards memorized!

$9.99 $4.99
Over 300 flash cards from the American Revolution to 1914.  Questions and answers are on the most important events and people in American history.
Shop